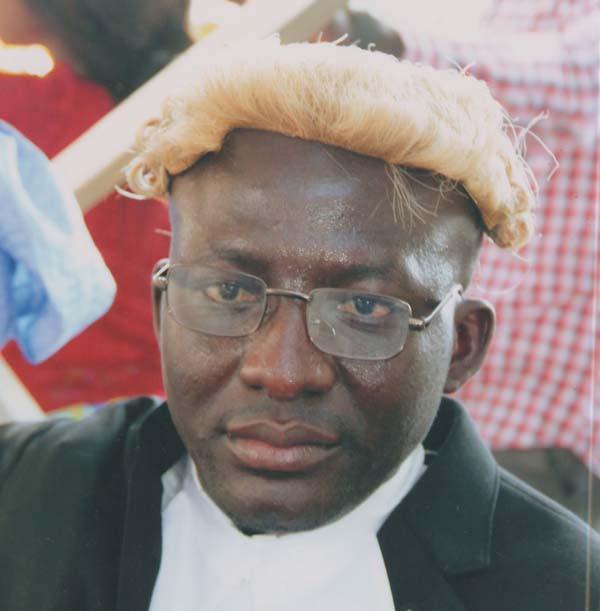 Congratulations to Muhammed Krubally for becoming the first visually impaired person in the history of The Gambia to be a Barrister and Solicitor of the Supreme Court of that country.

He wrote: "I acknowledge the true friends like Joan and Phil and my sponsors without whom attaining this important position might be impossible or delayed. I thank God a lot.

Phil and Joan Feller were sad that neither of them were able to attend the graduation ceremony. They would also have liked to have seen M Krubally's new daughter, born on January 6.

Phillip Feller commented: "This is an amazing story". It is a truly inspiring story not just for visually impaired children in The Gambia but anywhere in the world.

This is Muhammed Krubally's  story - written in October 2015

I was born in a village called Sankuleykunda. I am a Gambian by nationality. As visually impaired, at the age of seven, my humble parents sent me to Primary School in order to acquire education. Having started lessons at the school, I began to encounter numerous problems in coping with various lessons by virtue of my visual impairment.

However, it was observed and obvious that, for someone to comfortably attend any school and acquire a good and quality education, you must be able to read and write. Then, I could neither write nor read as normal, the printed lettered copies used by the sighted persons. So trouble, frustration and scepticism have arisen both on my side, parents, of course teachers too.

Many questions were asked upon this effect by teachers at Sankuleykunda School, my parents and myself. Some of the questions I recalled were as follows:"How could Muhammed learn with his visual impairment?" How could he read with this impairment? How could he write too? Some of the scepticisms were that, both teachers and my parents thought I could not make it at school. Instead, they assumed that only sitting at home to receive supports and aid from people was the best for me.

Even though, I vehemently insisted that I could still learn and later earn a living.Finally, I had to be given an opportunity to commence effective lessons in grade one.

While in class when I was not introduced to braille writing and reading, I depended heavily on my hearing skills and tried to memorise almost everything a teacher explained or read in all the subjects respectively. Whenever we underwent revisions on what we were taught, my ability to memorise and deliver the teacher's explanations became convincing and by far better than the sighted classmates.

In fact, to the teacher’s astonishment, what was thought impossible seemed possible. At times my incredible performances and contributions had to compel them to show my classmates that "What Muhammed could remember and delivered, cannot be done by most of you, despite his visual impairment."

Then news started to spread about the performance of a visually impaired student in school. Students started to get closer to me to seek assistance from me regarding lessons and I too did have their help as well. I managed to cope with courage and determination and inevitably, with the help of my parents, friends and teachers.

I finished grade four in Sankuleykunda Primary school when I never saw braille writings. I was then transferred to Campama School for the Blind and started in grade four. There, I started reading braille alphabets and later proceeded to Junior Secondary School called Garba Jahumpa Upper Basic school from class seven to class nine. My first assumption of leadership began in this schoolas a councillor.  The availability of braille materials or equipment helped me so much to enhance my performance.

From the Junior School, I proceeded to Nusrat Senior Secondary School from class ten to twelve. In Nusrat school, I was the first visually impaired president of the Pan-African Student Association, President of the Gambia Association of the Physical Disabled, Public relations officer of the Young Farmers Club etc. I also participated broadly in different debating subjects and crowned as best speaker many times. Yet, I still coped with lessons.

From Senior School, I proceeded to The Gambia Technical Training Institute (G T I) to study law. I earned myself a Diploma in Law Certificate. I held various important positions in GTTI as Chairman of the Independent Electoral Commission of the student's union, Programme Coordinator of the Law Student's Association and as adviser to the said Student's Union as well.

I then later proceeded to the University of The Gambia and underwent a four years LLB Programme in Law. I also have work experiences such as being a Court Interpreter, Education Officer and Assistant Registrar of the High Court of The Gambia.

Another significant portfolio I currently hold is the Secretary General for The Gambia Organisation of the Visually Impaired ( GOVI) has been vested on me through the unanimous genuine election of GOVI members of the Annual General Meeting.

Most interestingly and importantly, many of the people, whom on daily basis closely observe my movements and participation and contributions in diverse spheres of life, have already booked me as their future lawyer or solicitor. Inevitably, all these trusts undoubtedly stem from my impressionistic positivism and activism.

Yet, it must be born in mind that, whatever one does either positive or negative, people must criticise either side. Here, you the " the Ambitious" should be the extrovert and the strongest to achieve your desire. Yet, I still face challenges and criticisms but progressive in my dreams. I shall not cease in pursuing my long desired dream, unless otherwise, " ....Death"

Having successfully completed a four years rigorous LLB Degree studies in law, in February 3rd 2013, I was appointed as the first Visually Impaired Magistrate in the Gambia according to records. I preside over Criminal and Civil cases respectively. Senior and Junior lawyers appear before me and present and submit their cases on point of law after which I have the final say for determination before my court. Since at the time of my appointment as Magistrate, about nine months today, I wrote 29 Rulings and Judgements ranging from High Profile Cases.

As a visually impaired Magistrate, I need a laptop with Speech Synthesizer such as Jaws or Guide 9 to be installed in my laptop. I also need a very good Digital Recorder.These will enable me be more effective and efficient at work. They will also help me in making research because research is the key part of Magistrates especially visually impaired one like myself.

Finally, I have also recently undertook a nine months BL Studies at the Gambia Law School. The fee is expensive. It shall end in October 2015. I am yet to secure sponsor for this programme. In the next two months, that is January, the management of the Gambia Law School will start sending away those who are yet to pay the fee for this programme. The cost for the fee is 93000 Dalasis.

If I have help to completing this course will greatly add guarantee and security to my legal profession as well.

In spite of my visual impairment, faced with numerous challenges, discrimination, criticisms and hardships, I maintained the vigour, concentration, determination, dedication, commitment, research and faith. Today, I am what I am i.e. "A Healthy, Wealthy minded Visually Impaired Person"