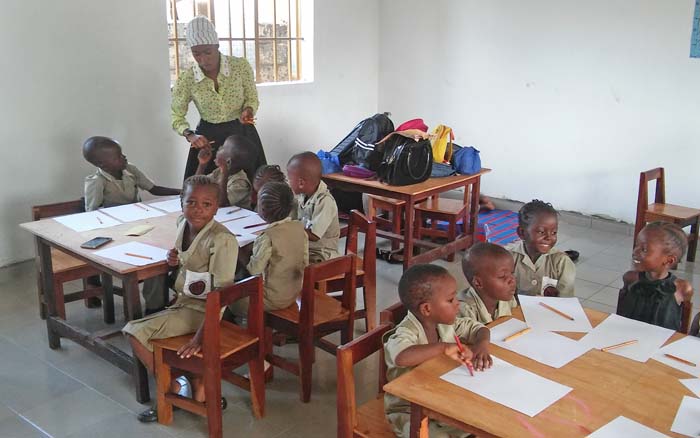 After almost 20 years the Friends of Visually Impaired Children in The Gambia is about to complete its final project.

The trustees particularly wanted to say 'thank you' to Lamin Saidy for all his hard work and patience and the way he has supported The Friends over the years. So it was agreed to sponsor the dream of his wife Haddy to set up  her own nursery school which will include some children with special needs. Right: some of the first pupils at Haddy's nursery school.

Haddy is about to retire as the head of a large upper basic school at Sukuta and so has extensive experience in education. Her nursery school has been built on land owned by Lamin in Brufut. She will allocate one of the classrooms as a day care centre.

Although this is the charity's final project Joan and Phil will continue to travel to The Gambia to give, when possible, support to the Start Now Centre in Brikama. This is going from strength to strength but still requires assistance as will Haddy's nursery school.

We feel it is wonderful that, after so many years, the Director of GOVI has said that its school is able to run without the support of The Friends. Thanks to the Gambian Education Department over 200 visually impaired children have been integrated into main-stream schooling.