Phillip and Joan Feller, representing the Friends of Visually Impaired Children in the Gambia, attended the inauguration of the Start Now project at Brikama in the Gambia on May 28, 2016.

The objectives of Start Now are to provide further education and training for the visually impaired and blind young people who have completed their schooling.

One of the beneficiaries of Start Now, Alieu Jallow, wrote this poem about the importance of education for those, like himself, who have a visual impairment.

From the gloomy dungeons of dependence have you rescued us,

And though our eyes maimed, made us see

The world and taught us to be the bus

That transports us into the future to be.

Ah! at last nor more would one grieve

The life after school for we now wield with power

The knowledge that makes one achieve

Independence. The days of disability are over. 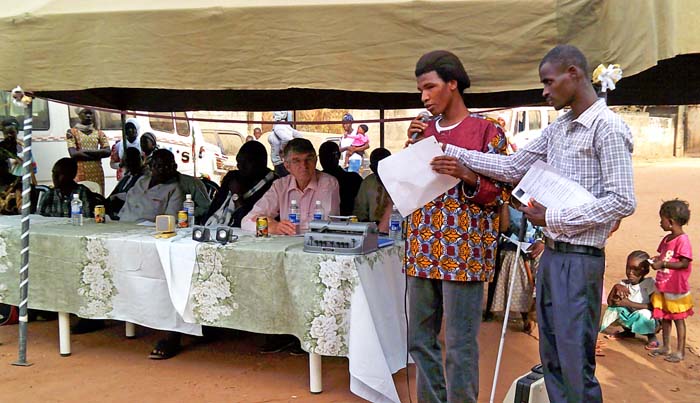 Above: Alieu Jallow, former GOVI School pupil, reading his poem from Braille, standing next to Charles Degold Gomez, founder member of Start Now. Phillip Feller is seated to his right.


At the inauguration ceremony Phillip Feller, chairman of  the Friends, described how he and his wife, Joan, had first become involved in helping visually impaired and blind children in the Gambia (see the Home page). He also described how they were introduced by Lamin Saidy, the Friends' representative in the Gambia, to Start Now.

"We met with the leaders of Start Now in November 2015," he said. "During that meeting with Alieu Jaiteh (founder/director), Charles Degold Gomez (programme officer) and Abba Sanyang (chairman) we were impressed with the team’s enthusiasm and transparency in all they wished to achieve. It was agreed that the Friends would sponsor the building and the work was scheduled to begin in January 2016. The Start Now team kept us up-to-date with emails and photographs."

Joan returned in February and, accompanied by Lamin Saidy, inspected the building. She was pleased with the speed and quality of work and the next instalment of funding was implemented.

The completion has gone ahead beyond expectations. A big thank you to Brikama Council, other government departments, the contractor and all those involved in the building work.

Below: part of the new building 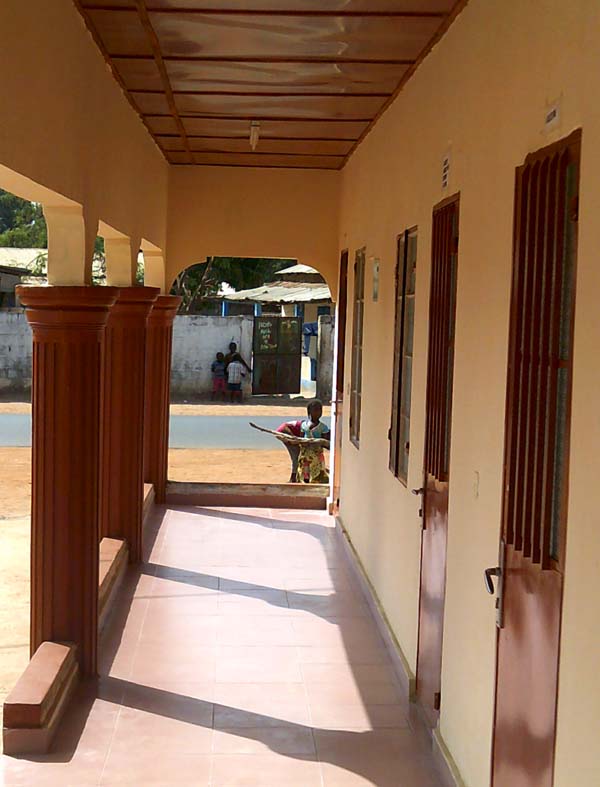