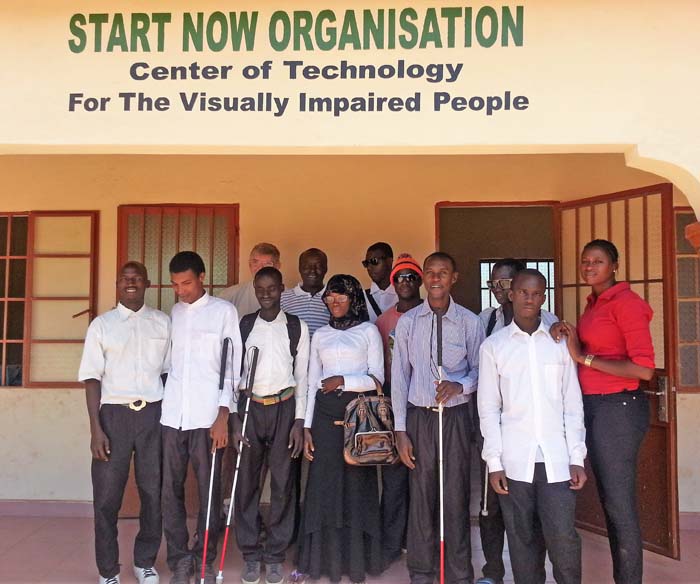 With the charity now winding down a quieter year was expected but then Lamin Saidy, our Gambian member and representative, introduced us to the Start Now team  (above).

This centre of Technology for Visually Impaired people, based at Brikama,  was the dream of founder members Alieu Jaiteh and Charles Gomez. When we met them in November 2014 we were so impressed by their in enthusiasm and commitment to the education of  visually impaired young people after main-stream schooling.

The Friends  agreed to support the Start Now project  and left funds for the building work to commence. The speed of progress was such that in February Joan Feller travelled to The Gambia with funding so that the work could continue.  Lamin Saidy forwarded progress reports and photographs to us.

Such was the speed of progress  that in May Joan and I  went back in The Gambia for the official opening of the centre on the 28th:  a memorable day and a thank you to all the local people who assisted.

Last year the trustees agreed that, as a thank you to Lamin Saidy for his time and energy given freely to The Friends,  we would sponsor a Nursery School for disadvantaged children.  This will be run by his wife,  Haddy, who will be retiring soon as the Head Teacher of a large school.  The land had been donated by his father.  We witnessed the foundations being laid and commencement of the walls of the school when we visited in May.

I returned in November with Joan and we visited the Start Now project where we found several students from The Gambian College waiting to greet us. We remembered many as they were former pupils at the GOVI School. From little acorns, great oak trees grow!

After a tour of the classrooms a question and answer session took place.As we were about to depart Saffie, whom we have known for many years (and was sponsored by one of the Friends’ supporters) stopped us and began to sing “We wish you a Merry Christmas”. I never knew she had such a lovely voice. Our thanks to Alieu Jaiteh and Charles Gomez who arranged the morning gathering.

When we visited the GOVI school we met the temporary Head Teacher, Natoma Camara (Ali Sallah is currently studying in Kenya).  Natoma  showed us round the recently completed Nursery School building consisting of three class rooms, all well quipped. The building was sponsored by the Dutch charities: Stiching, Gambia Kids and Jamila Kids.

It was noticed that the much enjoyed playground equipment (swings, a slide and two roundabouts) were urgently in need of repair.  Funds were left with Lamin Saidy to arrange the necessary repairs.

In March Phil Feller reported that yet again a woman had made her annual visit to the Gambia and had delivered food and other items worth £400 to the GOVI Resource Centre school as requested by the head teacher, Ali Saleh. She had contacted him via Lamin Saidy and the Friends’ website. The delivery included cassette players and Braille paper.

After visiting the school in November we had a meeting at the IEP offices (Integrated Education Programme). There we met our long-time friends Nancy Mendy  (Principal Education Officer for the Ministry Of Basic and Secondary Education) and Sarjo Bajinka (former Head of the GOVI School who now works with her).  I was amazed to hear that the IEP now oversees the education of 700 visually impaired pupils across The Gambia.  Trained Teachers are living and teaching in the various regions. A big thank you to all the IEP members and The Gambian Education Department for such an achievement.

Lamin Saidy’s wife, Haddy, will soon retire as a head teacher. The Friends have decided to support her proposal to build a small nursery school on land recently inherited by Lamin Saidy. This will be open to all children including those with any disabilities. During 2016 we saw the work on the building progressing and in November, when we visited, the roof was on and the plastering of the class rooms had commenced. We left sufficient funds for windows.

I kept my promise to Lamin Saidy’s son, Modou Lamin, that I would take him, his father and his younger brother, Dadi, fishing. Modou Lamin, thanks to the generosity of many, underwent heart surgery three years ago. We had a great day out on the river but it was rather too hot for me. Modou caught the biggest and the most fish that day. The Captain fish (see below) had a lovely flavour and was enjoyed by all the family for two days.

Modou is enjoying life and progressing well at school.

Sadly but understandably 2016 saw the  standing down of founder member and trustee, David Pointon.  1994 appears now to be in the mists of time when, having returned from The Gambia, one of my many requests for assistance for the education of visually impaired children there was answered by David’s “How can I help?”  This was followed by a visit to The Gambia to find out the needs of the visually impaired and the registering of the charity.

David travelled overland from Yorkshire several times between in 2003 and 2010.  He, and those with him in 2006, donated mini buses loaded with equipment and the buses were left at the school for much needed transport. One of David’s ambitions was to see the implementation of the training of all trainee students in the education of disabled children.  After many years this was done and the impact was immediately obvious at the GOVI school with the student teachers’ input bringing the exams results to a high standard. Recently the school has been recognised as a model for the teaching of visually impaired children. On behalf of all the members and many Gambians involved in the education of the visually impaired a very big thank you to David.

My thanks to Pip land, trustee, editor and manager of the web site. Thank you also to trustee Don Newbold CBE for his long and continued support. Thank you too to the Friends’ member Carol Haynes who has for many years freely given up her time to build and run the website.

Due to our age and the achieving of the original dream of education for many Visually Impaired Children in The Gambia, 25 years of every emotion one can have and wonderful memories, the end of 2017 will see the de-registering of the charity. Joan and I will still be travelling to The Gambia and all monies for the charity will be spent on the various projects.

A final report will be submitted at the end of the year.