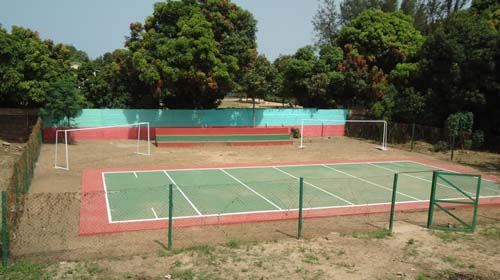 When Phil and Joan Feller arrived in The Gambia on November 18 2017 the Goal Ball court was not only completed but ready for the official opening. It was virtually two years to the day that that they had received an invitation from Tony Wright, then the MP for Great Yarmouth, to attend a reception hosted by the UK Parliamentary Football Club at Portcullis House in London. At that reception they received on behalf of what was then the Friends of GOVI (now the Friends of Visually Impaired Children in the Gambia) a cheque to help develop sports facilities for disabled children in Africa.

The UK Parliamentary Football Club is an all-party group of British Parliamentarians based in Westminster which is sponsored by the National Grid. This club has raised thousands of pounds for charities at home and abroad over the years. At the presentation in 2009 Tony Wright said: It is always a pleasure to be in a position to donate to charities and knowing Phil and Joan's voluntary work in the Gambia with the visually impaired encouraged me to ask our football club to make a donation. I know the money will be put to good use."

The Fellers  knew that the staff of the GOVI Resource Centre had dreamt of having a purpose-built goal ball court to paralympics standard so as to provide a safe environment for the children at the school to play football.

Prior to the court being built the children played football with a soft ball containing a bell, in old donated kits and with soft shoes on a rough mud pitch with tape marking the boundaries.

Once they had received the cheque the Friends submitted a request to the GOVI Board but it took a year to obtain their permission to build it and work could only commence if the Friends paid an administrative fee.Thanks to the hard work and dedication of our Gambian representative, Lamin Saidy, the court was built and it was a wonderful surprise to see that this difficult project had been completed to such a high standard.

The handing over ceremony was discussed with the committee organising the World Disability Day (December 3) and the VSO worker coordinating the various groups representing disabled people in the Gambia. It was decided that the march on that day should finish at the GOVI school even though it was a lengthy one given the high temperatures at the time.

As normally refreshments would be served after the speeches it was agreed that the Goal Ball court handing over ceremony would form part of the programme if the Friends paid for all the refreshments, the marquee and the sound system. The head teacher at the GOVI Resource Centre School, Ali Sallah, came up trumps by finding ladies from his neighbourhood who were willing to make over 200 meat pies. Everyone who sampled them agreed that the pies were “delicious”.

The handing over ceremony to the GOVI Resource Centre School was very successful and there was good coverage by Gambian Television, nearly all the newspapers and radio stations. But sadly that the British High Commission did not send a representative.Below: Joan Feller helping to open the gate to the goalball court during the handing over ceremony. 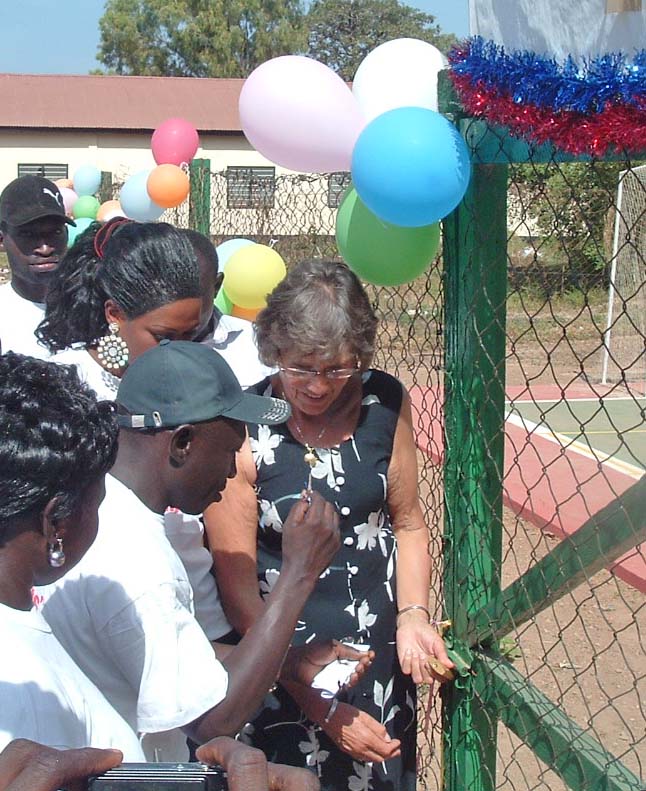 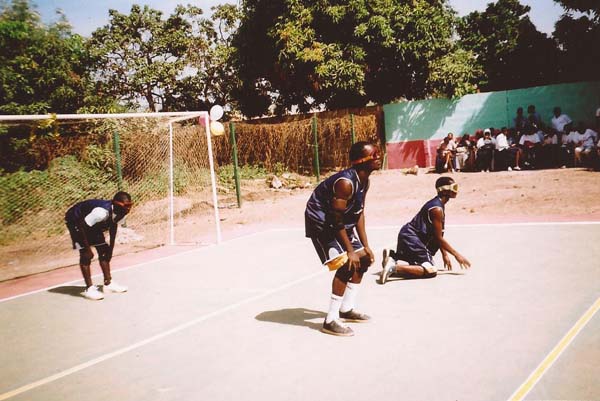 Above: Some graduates of the GOVI Resource Centre School taking part in an exhibition goalball match during the handing over ceremony. They wear goggles to protect their eyes, and this also means that all participants cannot see the ball or the court. Instead they have to feel and listen. This is the first goalball court in The Gambia.

During the proceedings Lamin Saidy handed over to the school, on behalf of Mike and Jacquie Wootin, several much needed tape recorders, batteries, tapes and musical instruments. The Wootins had visited the school earlier.