The Dales Team from the Wensleydale Rotary Club came back with many memories of their overland journey in January 2010 and their time in the Gambia, and especially at GOVI's school for the blind.

They were able to deliver many spectacles donated by Dales folk to the Sheikh Zayed Eye Care hospital.The spectacles will be graded by skilled technicians ready for distribution on prescription.

The team also delivered a large number of toys to the school for the blind which had been donated by school children in Wensleydale. The children had great fun playing with the soft toys, while the teachers assessed all the others and discussed how to use them in their lessons.

David Pointon ran a two-day training course for the teachers. The abacus made by students at Breckenbrough School in  North Yorkshire partuclarly fascinated them.

"We did a whole session on using the abacus," said David. "We did some Braille maths and different methods of pre Braille maths. One or two of the teachers were very interested and wanted to take it further. We discussed all sorts of further methods and ways of using it."

He had taken ten abacus with him which meant that most of the itinerant teachers received one to use in the schools they visited. These teachers are employed by the Integrated Education Programme (IEP) to assist blind and visually impaired children who attend the government high schools in the district around Banjul.

During the course David  showed the teachers  how to conduct functional visual assessment and introduced the magnifying glasses (donated by Hilco of  Hawes, North Yorkshire), teaching aids and toys that had been delivered by a team from the Wensleydale Rotary Club. The teaching aids included raised diagrams used in Maths and Science lessons. With the toys the teachers were asked to identify which areas of the curriculum they could teach using them.

"They were very good at that," commented David. "They took it to enormous lengths. They covered the whole curriculum. They were very imaginative in their ideas."

He added that although the toys won't be available to the itinerant teachers the objective of the exercise was to take any piece of gear that may be lying around and use it as a teaching aid. This would provide blind or visually impaired children with tactile, physical experience rather than just working in the abstract all the time.

At the school David Pointon enjoyed working with the children, giving both Braille lessons and also showing them how to use the toys. David Milner also had some fun times with the children.

Click on the picture to see a gallery of photos:

(For the story of David's first overland journey see Overland to the Gambia, 2003 ) 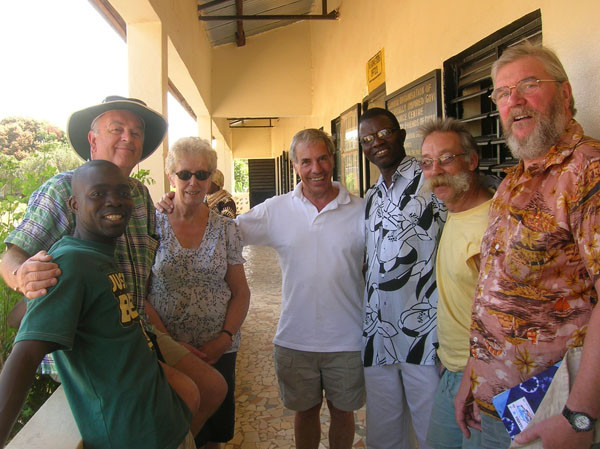