The Girl Who Barked

When Musa Mbye was 15-years-old he was sent from his home in the Gambia to Senegal to stay with a blind man so that he could learn how to beg. For most blind children in the Gambia that is the only way they can expect to make a living.

Mr Mbye is very honest about his profession as a beggar. He is also an important member of the GOVI rescue team. As chairman of GOVI’s district branch work he regularly visits outlying villages to make people aware that the blind and visually impaired are not useless members of society.

Thirteen years ago when visiting a village Mr Mbye heard of a blind three-years-old girl who had been left in a dog’s kennel. "She barked and scratched like a dog," he said. He took Adam Sarr to his own home to rehabilitate her. 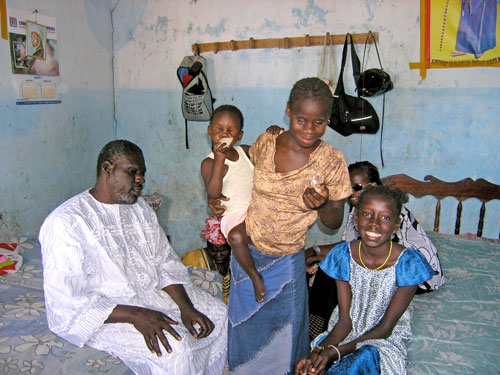 AdamSarr holding Fatoumata.On left is Musa Mybe
and on the right one of his own daughters

This September Adam Sarr will graduate from the GOVI school and be integrated into a mainstream school. At Mr Mbye’s home she happily cares for another young blind child, Fatoumatta.

In 2006 Fatoumatta’s mother begged Mr Mbye’s family to take her three-years-old daughter and raise her. For in the Gambia a woman who gives birth to a disabled child is often treated as a social pariah. Fatoumatta’s mother also knew that in Mr Mbye’s home the little girl would receive mobility lessons and be sent to the GOVI school. Fatoumatta was one of the first to join the nursery class at the school.

The majority of the volunteers on the GOVI Board are blind and make good role models for those involved in rehabilitation projects. Ebrima Trawally, the manager of GOVI’s Community Based Rehabilitation (CBR) project which is sponsored by Sightsavers International, frequently goes on field trips with Mr Mbye.

Mr Trawally explained that the tribes in the Gambia had different approaches to the blind. Some, he said, preferred to hide anyone who was blind. Sometimes these hidden ones were kept in appalling conditions. With Mr Mbye he and other GOVI outreach workers try to find these blind people and encourage their families to care for them properly and rehabilitate them.

This, and radio programmes sponsored by Sightsavers International, is all part of GOVI’s sensitisation programme. Mr Mbye has become well known for his Saturday phone-in radio programmes.

"Sometimes these programmes are a wake-up call," said Mr Trawally. "Someone rang in and said ‘I have this blind person in my home - do you think he can go to school?’"

Mr Trawally was sure there were more children at the GOVI school because of such radio programmes. "People don’t want to be associated with a disabled child. But since this programme came they see that they can get their children educated free. We want the children to come out - this is their status quo in society," Mr Trawally said. (NB - the CBR programme funded by Sightsavers International has now finished.) 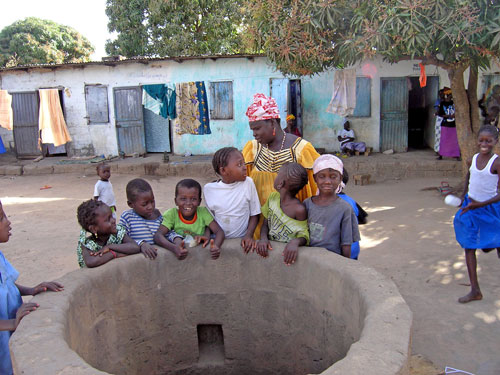 Adam Sarr gave permission for her story to be told.