FGVI and the School for the Blind

This charity was founded in 1998 with the aim of raising funds for a purpose-built school for visually impaired children to be built at Kanifing, just outside the main town of Serrekunda, Gambia's largest town.

Until this was built GOVI's school for the blind and visually impaired consisted of two classrooms and a head teacher's office beside the Campama School in Banjul. Conditions at the old school were woefully inadequate, with a leaking roof and very little equipment, but the drive and commitment of the staff and the enthusiasm of the children were wonderful.

It was during a visit to the old school that Phillip and Joan Feller received a plea from the head teacher for help. After returning to the UK and making many telephone calls they were able to return to the Gambia with David Pointon, a professional in the needs of the visually impaired. With the Fellers he became a founder trustee of this UK registered charity.

At that time GOVI had received a large plot of land at Kanifing and dreamed of building a school for the visually impaired children of the Gambia, but owing to lack of funds no progress could be made.

The Friends of GOVI took over the raising of funds and with the support of The Lions, Rotarians, Church Groups, wonderful ongoing fundraising by Fairway First School at Eaton in Norwich, large donations from Muslim Aid UK and help from many individuals the school was completed. It was officially opened by her Excellency AJA Isatou Njie, the Vice President of The Gambia on December 3rd 2002. 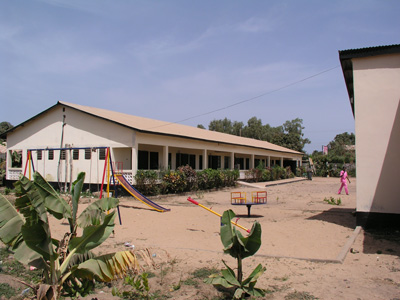 It catered for up to 100 blind and visually impaired children and includes five classrooms, a teachers' office, toilets and washing facilities, a large dining hall, a kitchen and night watchman's house.

This is stll the only school for the blind in the Gambia.

Education in the Gambia

Schools in The Gambia rely on the efforts of their teachers not just to teach, but also to raise money for building materials, wages and everything else a school needs. Some do better than others, but none do well. Some have desks and chairs but most have benches; most have a board of some sort on the wall but some have nothing; some have toilets for the children but others just have holes in the ground. The quality and facilities depends on the luck that the school has had with sponsorship and that often depends on the enterprise of the head and their staff.

Education in The Gambia is not free. Costs include basics we take for granted in the UK such as school uniform, school shoes, a bag, books and pencils. However, fees, uniform, equipment and midday meals may be provided free if the school is sponsored by Gambian businesses, tourist organisations or charities. The Gambian Government and its partner agencies (such as the United Nations World Food Programme) run schemes focusing on particular areas of concern, for example providing school meals in ‘food insecure’ areas and sponsoring secondary school fees for girls.

Gambian children start school between the ages of four or five and attend Primary School (Lower Basic). Most parents do their best to send their children to all six years of primary school. All schooling (except in Islamic schools) is carried out in English. In primary classes children learn their numbers, how to count, learn the days of the week the months of the year. Towards the last years of primary most of the children can read and write. The year is arranged in three terms. At the age of about 11 Junior School (Upper Basic) starts, but because of costs some never go on to junior school. From the age of 13/14, families that can afford it (less than 50%) send their children for the three final years of Junior Secondary School ending in exams where children get the equivalent of ‘O’ levels or GCSE.